The Athabasca Basin hosts some of the highest grade and lowest cost uranium deposits in the world including the famous Cigar Lake, McArthur River and the more recently discovered Arrow, and Triple R. These deposits are all high grade unconformity-related deposits, of which there are two main sub-types (1) unconformity (Cigar Lake) and (2) basement hosted (such as the Arrow deposit). Saskatchewan, Canada, has been voted the third best mining and exploration jurisdictions in the world by the 2020 Fraser Institute Survey. This makes it a premier location in which to do business.  All of 92 Energy's projects were selected using its proprietary prospectively model over the Athabasca Basin. 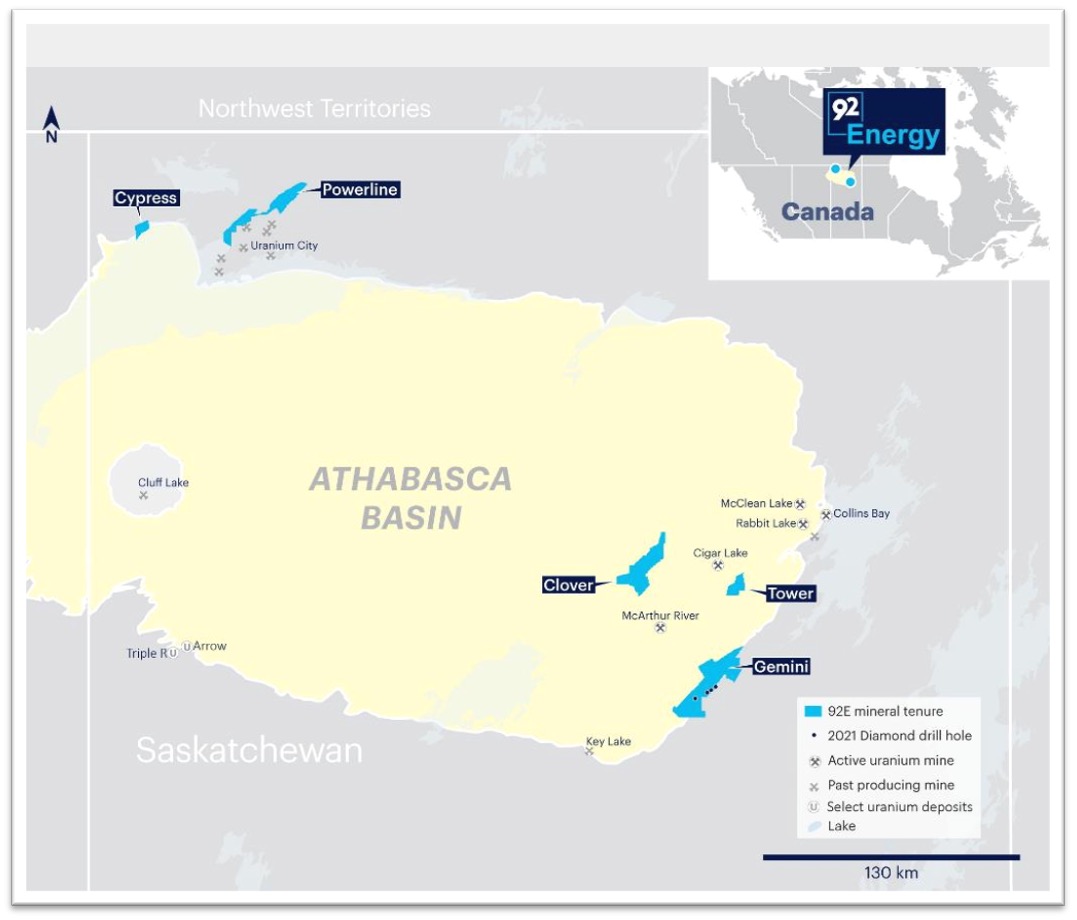 The Gemini Project (Gemini) is an early-stage unconformity-associated uranium exploration project located on the eastern margin of the Athabasca Basin, 27km southeast of the McArthur River uranium mine, 60km northeast of the Key Lake uranium mill and 780km northeast of the regional centre of Saskatoon. Gemini consists of 13 granted mineral claims with a total area of 445.3km2. Gemini includes the recently discovered Gemini Mineralised Zone ("GMZ") which is a near surface basement hosted uranium discovery.
‍
The Gemini Project straddles the eastern margin of the Athabasca Basin. In the eastern and north-eastern parts of the project area the unconformity between the Athabasca Basin and underlying crystalline basement rocks is shallow and typically buried beneath glacial sediments or is completely absent. The unconformity is interpreted to dip gently to the northwest and may reach depths of up to 170m in the western part of the Gemini Project.  Historic prospecting and surface mapping at Gemini identified numerous radioactive boulders, lake sediment and muskeg samples (up to 663 ppm uranium) in the southern part of the project area indicating a radioactive source up-ice direction to the northeast.

The Tower Project (Tower) is an early-stage unconformity-associated uranium exploration project located in the eastern Athabasca Basin, 12km southeast of the Cigar Lake uranium mine, operated by Cameco Corporation, and approximately 820km northeast of the regional centre of Saskatoon.

The Tower Project consists of two granted mineral claims with a total area of 63.0km2. The Tower Project is located well within the Athabasca Basin and overlies Wollaston Domain crystalline basement rocks. The interpreted vertical depth to the unconformity in the project area is expected to be approximately 250m. Only four historic drillholes have been completed on the Tower Project to date.

The historic drilling was conducted between 1979 and 2015 and primarily targeted magnetic lows in the south-eastern corner of the project area, which were interpreted to reflect prospective metasedimentary rock units. The most recent geophysical work was undertaken in the mid-2000’s and consisted of EM and magnetic surveys.

The Tower Project is considered by the Company to be underexplored, with potential to host high-grade unconformity-associated uranium mineralisation. During the summer of 2021 92 Energy undertook airborne VTEM and magnetic surveys over the Tower Project. Planning of additional ground geophysics as well as diamond drilling is currently underway.

Drilling will commence on Tower in September 2022.
- 92 ENERGY TO DRILL 1,500M AT TOWER URANIUM PROJECT 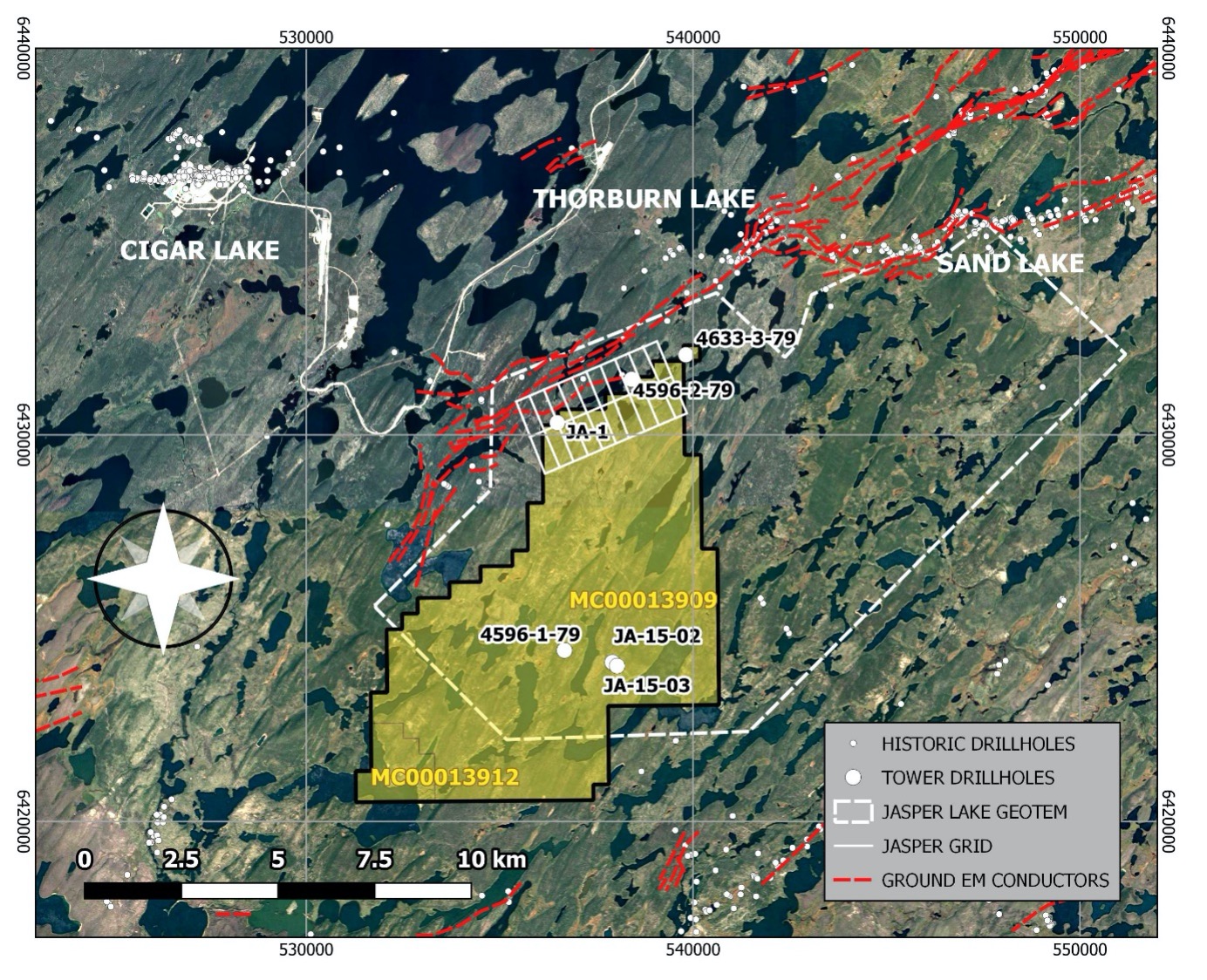 The Clover Project (Clover) is an early-stage unconformity-associated uranium project located in the eastern part of the Athabasca Basin, 30km northwest of the McArthur River uranium mine and 35km west of the Cigar Lake uranium mine (both operated by Cameco Corporation) and approximately 780km northeast of the regional centre of Saskatoon.

The Clover Project consists of six granted mineral claims with a total area of 267.5km2.The Clover Project is located well within the Athabasca Basin and overlies Wollaston Domain basement. The interpreted depth to the unconformity in the project area is expected to be between 450 to 850m. 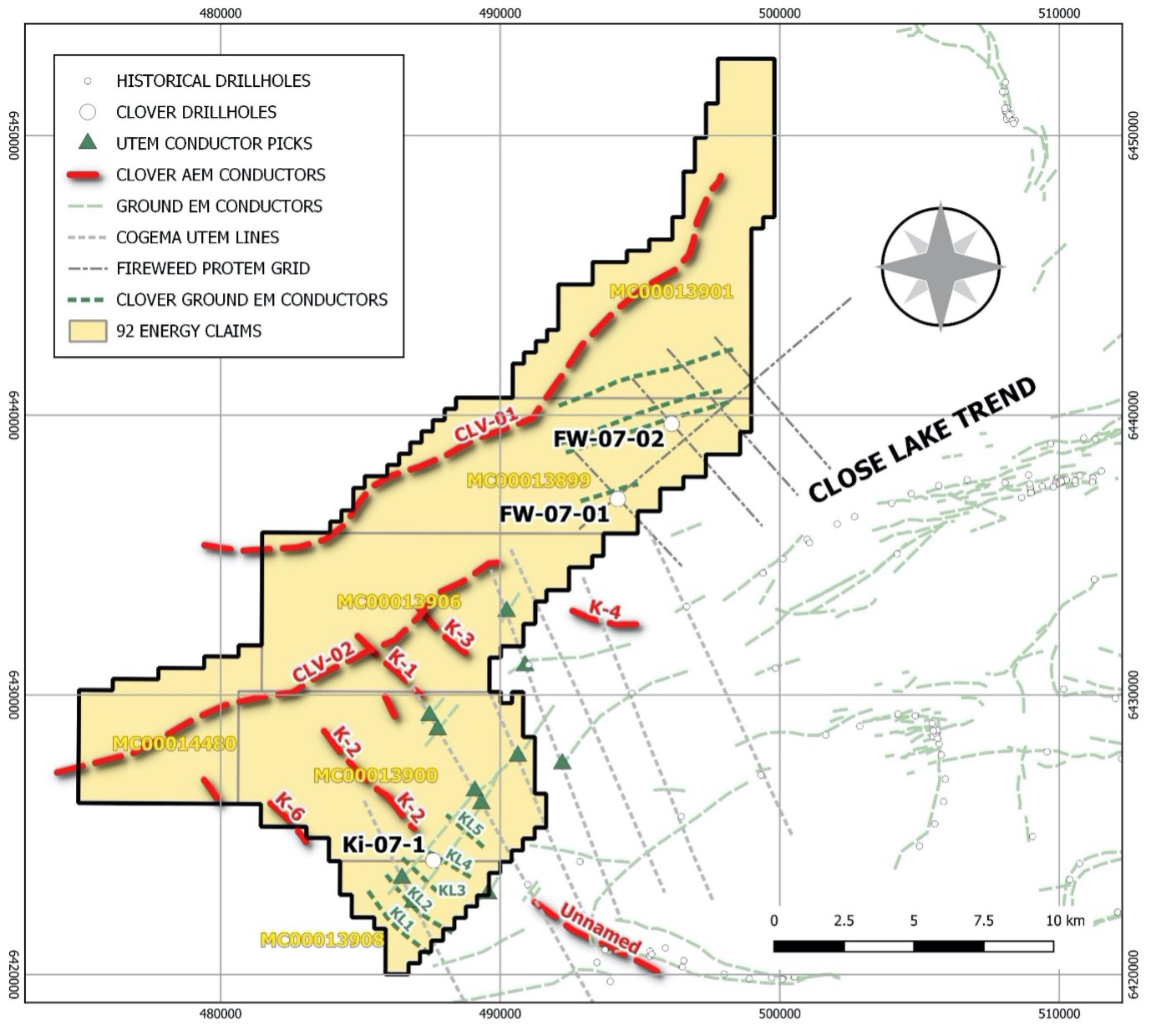 the Powerline project has numerous Uranium Occurrences and little exploration activity since the 80s.

Ground geophysics and geological mapping to aid in drill targeting is currently being planned by the Company for Powerline, scheduled for late 2022. 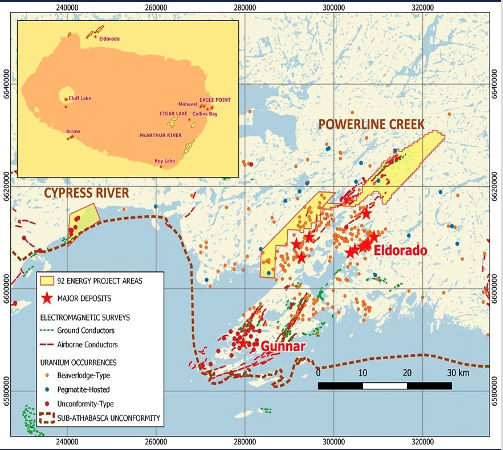 Early work included prospecting, an airborne radiometric survey and an airborne EM survey (INPUT), as well as ground geophysics and geological mapping. This work led to the discovery of multiple radioactive occurrences along the shore of Lake Athabasca within 92 Energy’s claim including the Beach Zone (SMDI #3644) and Beach Zone West (SMDI #3645).

Minimal uranium exploration has occurred on the Cypress Project in the last 15 years. Geological mapping and prospecting to aid in drill targeting is currently being planned by the Company for Cypress, scheduled for late 2022. 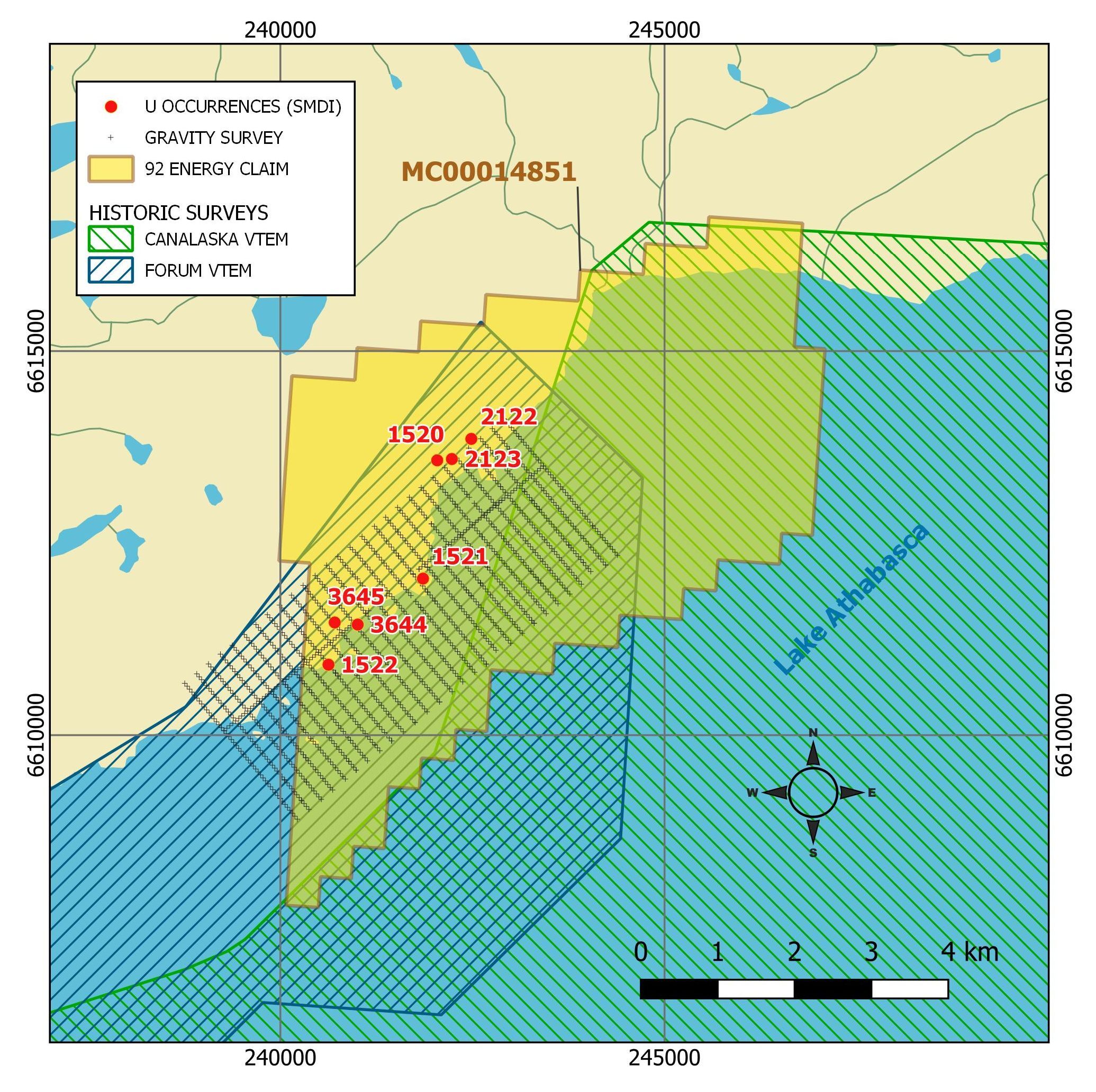